Home / Medical Cannabis Guide / Inflammation Types: Where Do You Fit In? 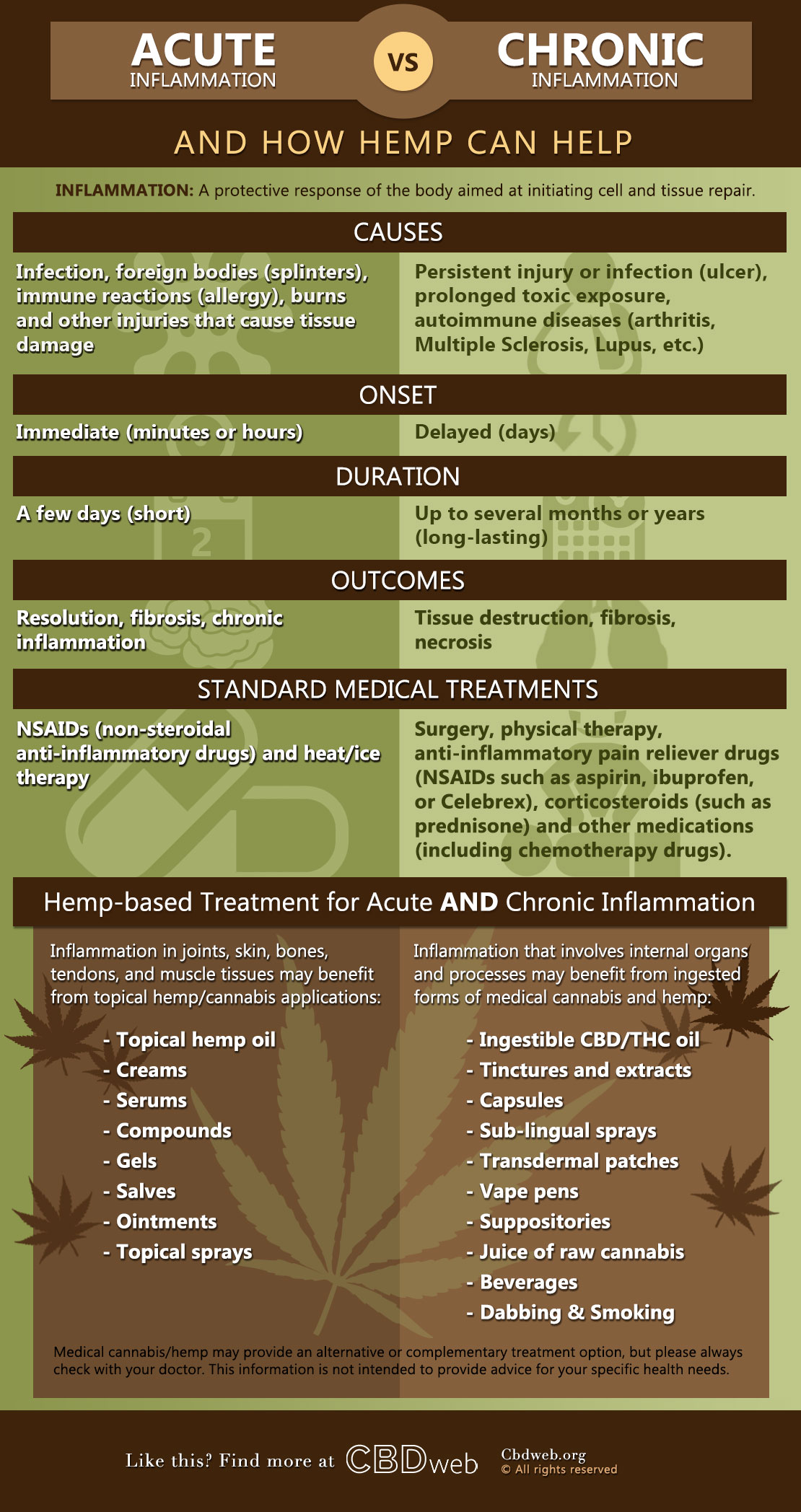 Embed this infographic on your site

The word “inflammation” often conjures up negative connotations. Inflammation is, after all, at the root of many serious diseases. However, inflammation can also be a crucial part of the healing process.

The word inflammation comes from the Latin word inflammatio, which means “setting on fire.” Inflammation is the body’s natural response to various injuries and illnesses. When the body does not produce enough inflammation, progressive tissue destruction can occur. In most cases (the exception being autoimmune disorders), inflammation helps to combat harmful bacteria or other stimuli.

The two primary types of inflammation are acute and chronic, and they tend to have different causes and require different treatment approaches.

Acute inflammation is a normal tissue response to foreign bodies, injuries, and other outside factors, and is identified by the classic symptoms: swelling, pain, redness, and loss of function. The causes of acute inflammation fall into four categories:

When acute inflammation occurs, it is important to listen to your body and be aware that inflammation is the process the body is using to heal itself. If the underlying cause is something that can be managed, such as stress or alcohol, then that issue should be addressed.

Inflammation that occurs regularly and/or over a sustained period is considered chronic.

Chronic inflammation is generally connected to a disease or disorder. In some cases the inflammation is an effect of the associated disorder, while in other cases it can be the cause.

In autoimmune disorders like rheumatoid arthritis or Crohn’s disease, for example, the immune system malfunctions or reacts to harmless stimuli by attacking the body’s organs or joints. With these conditions, chronic inflammation is an effect.

When discussing hemp treatments, it is important to differentiate hemp from marijuana. Hemp and marijuana are both derived from the same plant family: Family Cannabaceae. The variations of genus and species within that family are what separate hemp from marijuana. Those species commonly known as marijuana contain high levels of Tetrahydrocannabinol (THC), a psychoactive agent.

Plants within the cannabis family that are known as hemp or “industrial hemp” have far lower levels of THC, so low that the psychoactive effects of the compound are completely negated. Since the compound in cannabis that is thought to reduce inflammation is cannabidiol (CBD) and not THC, this has led to continued exploration of hemp-based treatments for inflammatory conditions.

Neither hemp nor any other form of cannabis has been scientifically proven to cure any disease, but there is a growing body of research and evidence that cannabinoids found in hemp can indeed relieve difficult to treat pain and other symptoms. These cannabinoids may also slow the progression of certain diseases, including Multiple Sclerosis, Alzheimer’s and Parkinson’s disease.

Since hemp has properties that help control inflammation and pain, those with chronic inflammation may find it useful in improving their quality of life. The modern alternative healthcare and nutrition industries regularly use hemp in both ingested and topical forms.

Hemp products are extremely safe in either oral or topical form. It is advised not to overuse hempseed oil for cooking as it can cause absorption and digestive issues. Additionally, ingested hemp should be regulated if one is taking medications for blood clotting. If there are ever uncertainties regarding side-effects or contraindications, it is always best to check with your healthcare professional.